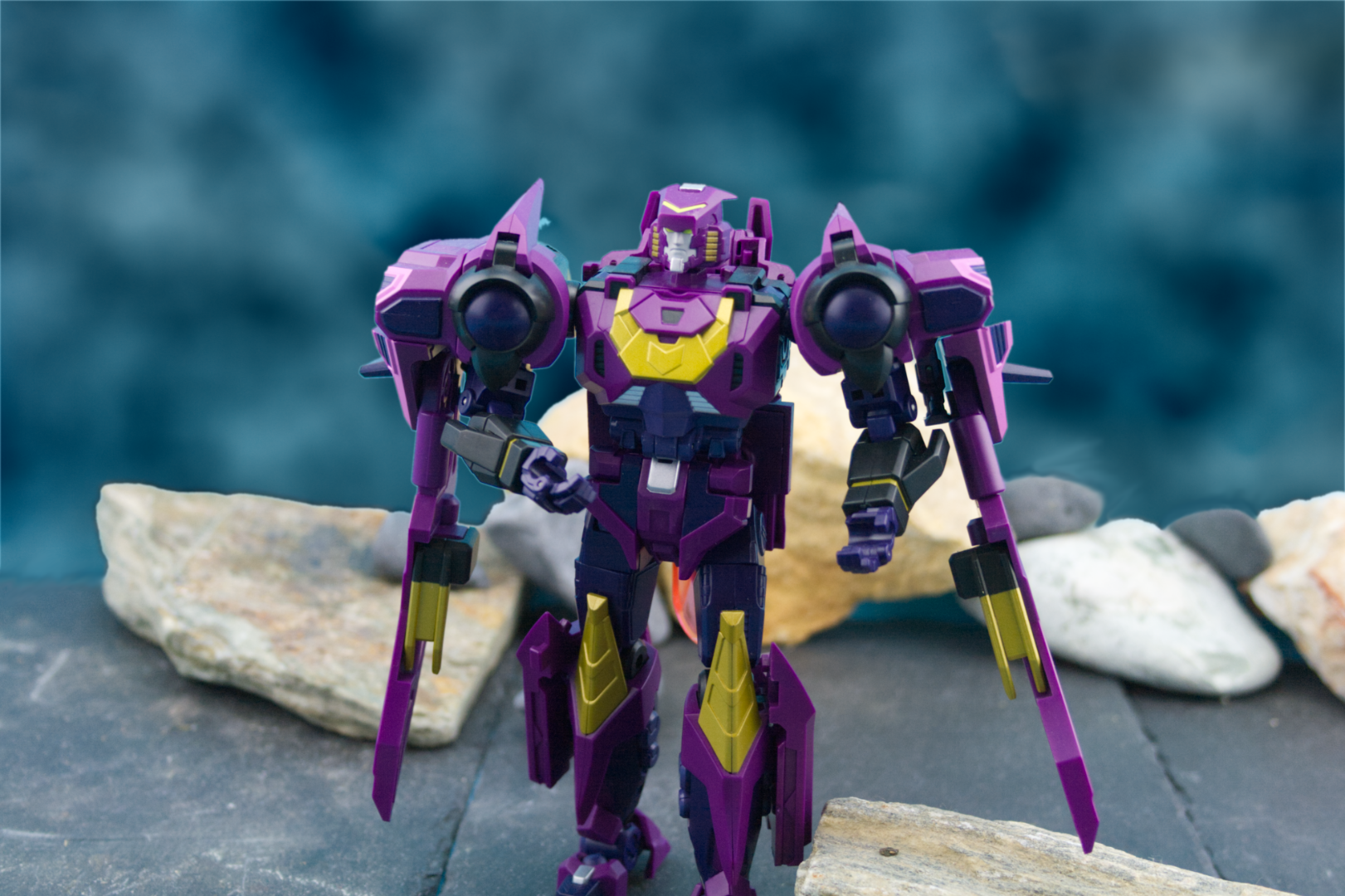 Despite January lasting what felt like an eternity I still managed to put off this list until February, a feat of procrastination to be proud of. In my defence it was purely down to getting some photographs together, my photography equipment having been tidied away all year, I had the basics of which toys were going where on the list since the first week of the year. That and having to concoct a series of words in the correct sequence is always a challenge.

Anyway, 2019… I feel like there were fewer toys than previous years to consider for this list, at least fewer that get my attention, which is always nice for the old wallet. But what was lacking in quantity has been more than made up for by the quality; I’m struggling to think of a single terrible toy that has filled my shelf with disappointment. Maybe MPM Ironhide? Dunno, I found a friend who enjoys him to pass him on to, so even he’s a win in my book.

So, while looking back on what was an awesome year what made the cut? let’s read on to find out…

Combiner teams eh, everyone love a good combiner and this case of bad business practices is an excellent start to an as yet unfinished Bruticus. While I’ve opted for this Swindle alike over the first of the set, the not-Vortex Impetus, this is purely for the character of the toy. The MMC take on Vortex is equally excellent as a toy but he lacks the absolute charm of this lad. Look at that happy face, satisfied that he’s convinced you to take on yet another absolutely terrible deal! Add in that he’s a great looking lad in both bot and alt mode, and the impressive all in one gimmick that MMC are putting in this group and you’ve got a very deserving number 10 place.

Hound is possibly my favourite character in Transformers, a laid back hippy that just wants to explore, plus he was the first full sized Autobot I had as a young lad. The effort it takes to not automatically place any hound at number one is a challenge for me to be sure. But that doesn’t mean this boy from Iron Factory doesn’t deserve to be on this list. If anything it meant he had to fight all the harder to make it past my consciously being extra critical of him.

He gets here by being fantastic. He poses, he transforms, he looks and plays damn good however you have him. A gorgeous green with just enough extra accents to make him stand out and a handsome face round out a great toy however you look at him.

Strictly speaking, I don’t think this toy really has “it”. His transformation is basic, and some of the kibble definitely impedes his articulation. So what is he doing here on this list? He’s a beast-former and that always gets extra marks in my book,and robotic beasts doubly so. He has huge guns and swords (SWORDS!) which also adds to the package, plus he has a cockpit on his back that can contain a pilot figure from the diaclone reboot. He turns up in my house with his Zoids ass robo-cat mode and I’m just heart-eyes for days! Would I recommend this toy to anyone? No. But I would say if you need a Hot Rod as a Zoid in your life as much as I did you will *not* be disappointed!

XTransbots used to be known for being of somewhat iffy quality, but boy have they turned that around! The last year or two they have been consistently producing fantastic toys that look beautiful and are great fun to play with. I’ve yet to grab their Motormaster, and even then we’re still waiting on the trailer with combiner parts, but what they have delivered so far fills me with huge anticipation.

Maybe I’m slightly biased by the fact the Stunticons are obviously the greatest combiner team ever (on account of me getting the box set one Christmas, and the only set I had all members for, and a small thing that was my first cosplay experience with a very dear friend), but what’s been done with this set of lads is magical. Everyone has his own transformation, though some bits are shared, and everyone looks exactly as they should. What completely wins my heart is those wonderful alt modes, I’m not a car guy but those retro sporty numbers delight me every time I see them.

I really can’t remember if all these boys showed up for 2019 or if one or two managed to sneak in to 2018, but I’ll not let that stop me doing them as a group! What’s not to love here? A full team of malevolent and sinister bad boys all wrapped up in the most evil aspect of all, bureaucracy! As always, Iron Factory have not let us down. I mean, sure the big lads have alt modes and transformations that are little more than “having a lie down”, but the three smaller members are wonderful representations of the characters, and Tes and Helex are still completely adorable in their robot modes.

To separate the the lads would be wrong so they can come together here as having the full crew all together is a special thing and I delighted to have them causing so much trouble on my shelf.

They even have a combiner gimmick I’ve not tried yet. Bad, smol, and full of fun, so very happy having this set.

MMC turning up with this IDW Senator Ratbat like they know how to gain direct access to my wallet. I’m a sucker for that purple and gold combo and then you add in the wonderful retool of their Wing, their best use of their Drift design prior to this and I’m sold! The changes they made to give his alt mode with stylish wings/pincers that can also be swords or, even better, a senatorial cloak when a robot and he’s one of the most stunning toys to look at in either mode that we saw in 2019.

When the Springer wars started with every company under the sun offering up early designs of what they had to offer I knew this was the version for me. As time passed my eyes were drawn elsewhere, I was particularly tempted by the Open and Play Big Spring but I never found one when it was convenient so I continued to wait for Saltus. The wait was totally worth it! Right out the box he looked great, and his transformations were completely intuitive. I’m a believer in toys should be played with, so when something turns up with 273 steps of tiny part realignment I’m typically a touch disappointed. Sure I’ll run through it a few times but the chances are it’s not a toy that will be coming off the shelf all too often. When something looks this good in three modes and still doesn’t make me put in a shift to get between them… That’s a toy that belongs a this list.

Everyone’s favourite tubby little sailor. He wasn’t supposed to be on my purchase list, but after my misadventures with FansToys version (I kinda broke him almost immediately as I mistransformed him) I knew I wanted another to replace him, and this version from XTB deffo looked more the part to my eyes so why try to hunt down another of the FT version. Sometimes silly mistakes are blessings in disguise, and that is true here. I think he looks better in both modes, I obviously approve his transformation much more, and he came with a million and one extras to enjoy including a bucket and spade and a beach ball! He also exudes charm whenever you get him in hand or in front of a camera. I… I basically love him!

“But Dom!”, I hear you cry, “you don’t even like the Bay movies, you think they gave you pretty much every thing you didn’t want from a Transformers movie”. And you’re right to say this.

But, I would reply, when a toy shows up that looks THIS good in both modes, and has such a fun transformation, and has such marvelous articulation… Well, what am I to do? He even comes with a Viviane Wembly figure, and has working doors that open to reveal seats she can sit in. And he is one of the few good things to come from the cursed set of films. He’s a robot who thinks he’s french. For no reason, just… French! This is the kind of nonsense I delight in!

I know a Bay-former at number two makes no sense for me, but as a toy he’s just too damn good and that’s very hard to ignore.

What the hell has gone on?! Not only has a Bay-formers toy grabbed the second place but another movie bot has made it to number one!

Now, lets be fair, This is a Bumblebee movie toy and therefore far easier on the eyes and far more fun to watch on a screen. But wait a minute! Again! This isn’t a third party effort, or even a Masterpiece character, this is a mainline toy. Is this really the best the year had to offer? Well, yeah.

Everything about this guy is spot on, from picking up on the gorgeous design from the movie and making it to toy form almost unscathed, a fun transformation, and, AND, they haven’t been shy with the paint for once.

He’s easy to play with and poses so well, he has a transformation that is quick and easy but still has enough about it to be interesting, he leaves me wanting more! What a blend of everything I want from a toy. Now there are minor changes that would make him even better, I’d love him to be bigger and with some Masterpiece type changes such as articulated hands that don’t just have a big 5mm hole slapped in them, but for what has been made and at such a price point… Seriously, what is not to love!

I mentioned earlier that it was a year for great toys so I’d love to call out some other favourites that in another year could have made the list. Iron Factory continued to pump out stonking toys, Hound got the nod here but their Mirage or Megatron were also magnificent. Generation Toy have given us some fantastic Protectobot limbs and I’m so very excite for their Hot Spot to finish out the set. And lastly a toy that would have been on the list if it weren’t for him just not having an intangible “good” feeling in my hands, as indistinct as that is, Planet X’s Kadmos. He looks amazing and has a feature I hope to see spread across more toys in the future – waist tilt. It took long enough but now we have ab crunch being expected from MP-like toys I would love to see the waist tilt to rock from side to side be the next big change to what people can expect from their toys.

So that’s it. My year in toys and what excited me most. Thanks for reading and I hope you’ve enjoyed this, see you again next year? I hope so!