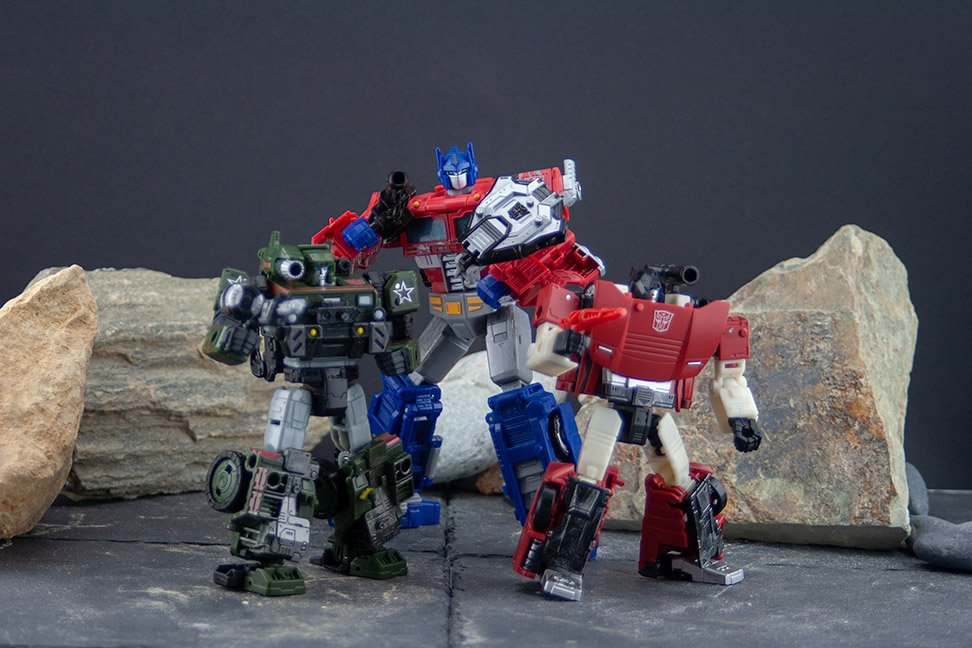 So then, time again for another list and pretty much bang on time this year. What is going on!? But a list is prepared and and that’s the important bit. I suppose it should go without saying but this list is just what I’ve enjoyed this year. There’s no real objectivity here, I’ve just looked at the toys I’ve picked up in the last 12 months and then selected and ordered those which have given me me the most feelings. Purely my gut reaction to the memories I have around the toys. I’ve made vague attempts at justifying those thoughts and feelings but that’s very much post hoc. *shrugs*

The other odd thing with this years list is the lack of any official Masterpiece toys. This didn’t happen intentionally but sometimes that’s just how it happens. The only truly memorable MP for me this year is Sunstreaker/Cordon and while he’s absolutely gorgeous he didn’t really conjure extreme emotions for me. Dunno why, he really should have, but it is what it is.

Anyway, lets do this!

Finally a pair of smol lads that are a sensible size for the MP scale. Yeah, they can’t fit in their dad’s chest anymore but a styling olde time full size cassette alt mode makes up for this, and until we get some actual mass shift tech in our toys this is a compromise I’m very happy to make.

They have themselves a nifty little transformation and look great with their important ‘Con leadership mates on the big boy shelf. Lovely!

Is this a transformer or just a transforming toy? Does it even matter? Dunno, but I kinda love this lad. Then I always have been a sucker for a distressed paint job. Add in his little extras like the welder and grabber claw on his arms, not to mention his kinda daft breastmaster robot, and he’s all sorts of fun.

For what it’s worth, I’ve decided he’s Bumblebee taking a summer job on a construction site while on holiday from robot university. I mean, that head isn’t a million miles away is it?

Another not Transformer Dom?! You’ve gone too far this time!!

Maybe, but he’s an Akira bike with a tiny robot rider that integrates seamlessly in to his big robot mode and so I can’t really not include him can I? He was my number one chase figure of the year, something I was completely desperate to pick up and I was incredibly lucky to be gifted him by a wonderful friend which is so much more than deserve. If you’re reading, I love you, you gorgeous cougar!

Kind of a cheat to fit a whole toy line in to a single slot but these lads are completely stunning and all deserve some recognition. My first pick up was Hound as he’s one of my boys and I’ll love him forever (he was the first “full” sized Transformer I had as a child) and he knocked my socks clean off! Combiner Wars left me kinda cold, and while Titans Return and PotP were fun and cool toys they didn’t fully grab me, but this Jeep guy… Wow!

I was given Sideswipe for Christmas by my mother and he matched up in class to Hound and I quickly picked up Prime too based on the evidence. So far all my experience with the line has given me brilliant and fun toys which look amazing, are nicely articulated, and and have great transformations between equally great bot and alt modes.

The smallest toy on the list but she shouldn’t be judged on her size. She is packed with personality and is possibly the greatest fiddle bot of all time! She’s a nice enough jet in alt mode, sure, but in bot mode she is endlessly posable and never lets you down however you set her up. Guaranteed sass no matter how you have her. Plus that colour scheme is well gorgeous!

The only TFN pick up on the list this year but he gives me so much I enjoy from toys in one stunning pink and black package. His transformation has some odd steps to make it interesting even if it’s not great, and he had a very rocky start being misassembled from the box, but it had everything I need to put him right and when I did get him sorted he was completely WOW!

His Headmaster is a lovely little bot, and other than that not the most accessory laden toy with just his big pink rifle, but he’s not the sort of guy who needs too much to carry him. The colours as mentioned are fantastic and he has the right amount of moulded and painted detail to keep me happy, and those wings give him one hell of a presence boost!

He’s absolutely cast his magic spell on me!

My first Planet X Dinobot and while I know their Grimlock has been around for some time now this metallic reissue was my first experience of him and he’s just so full of character! Love his dino mode and it’s not a huge pain to get him there and back.

He is absolutely the definition of charisma in toy form. All I have to do is look at him to think “YES!” The guy’s a rock star!

More dino goodness? Yep, and deservedly so. GigaPower are completely my jam when it comes to dinosaur robots and this lad is suitably giant, heavy, stompy, and so much fun! GP continue to use the same basic concept for his transformation as his Snarl and Slag brothers, mixed up nicely to give him some individual personality and he looks great for it in both modes.

He has all the extra moulded details I crave in a toy, often picked out with some thoughtful paint to really show off how good a robot dinosaur can look.

I’m also a huge fan of the metallic effect for this set over the chrome too. Like the Dinobots would care to keep their shiny bits that shiny!

You don’t even like the Bay movies designs Dom, why is a BayBot so far up on your list?

Well, to put it simply the lad is both gorgeous to look at and a fun toy to play with. Taken off the screen the overly busy and endlessly moving designs are much easier on the eye and can look, as seen here, totally beautiful. The guy has a great paint job about him that really looks the part with so much detail added, I can barely rip my eyes away from him!

And that’s before mentioning how great he looks in alt mode (even with stupid flame effects, I mean come one – Prime would never dress himself up like that!) and how much fun it is getting from one mode to the other. I’m pretty sure the guy is made from plastic and magic. Genuinely an unexpected highlight of the year.

When a toy comes along with extra parts that integrate seamlessly I’m usually pretty damn happy. Extras that are fun for a minute then live in a box forever are one thing, but a huge robot which looks his best when dressed to the nines, and every item has a place to go in alt mode so things don’t go getting lost? SIGN ME THE FLIP UP!!!

I’ve not even started about his Powermaster and the incredibly sweet small truck cab robot which add so much play value to the guy, or even the stupidly good beefy boy that is PMOP before his God Armour gets put on!

He’s fun, he’s gorgeous (just look at those baby blues!), he’s pretty much everything I want in a toy!

Best toy of the year then? Not quite…

Zero? I thought this was supposed to be a top ten.

Well, I felt it was unfair to every other toy I’ve picked up this year to put them up against this guy. I mean, the lad is everything I want and more besides!

Huge? Yep. An amazing paint finish? Roger that. WINGS? A DRAGON HEAD CANNON? Seriously, how could anything else even start to compete. He even has swords with is always something like +124523% to a toy for me.

He’ super easy to get between modes which is always a nice to have and looks great whichever mode you put him in. And sweet Jesus that wingspan! I… I think I love him!