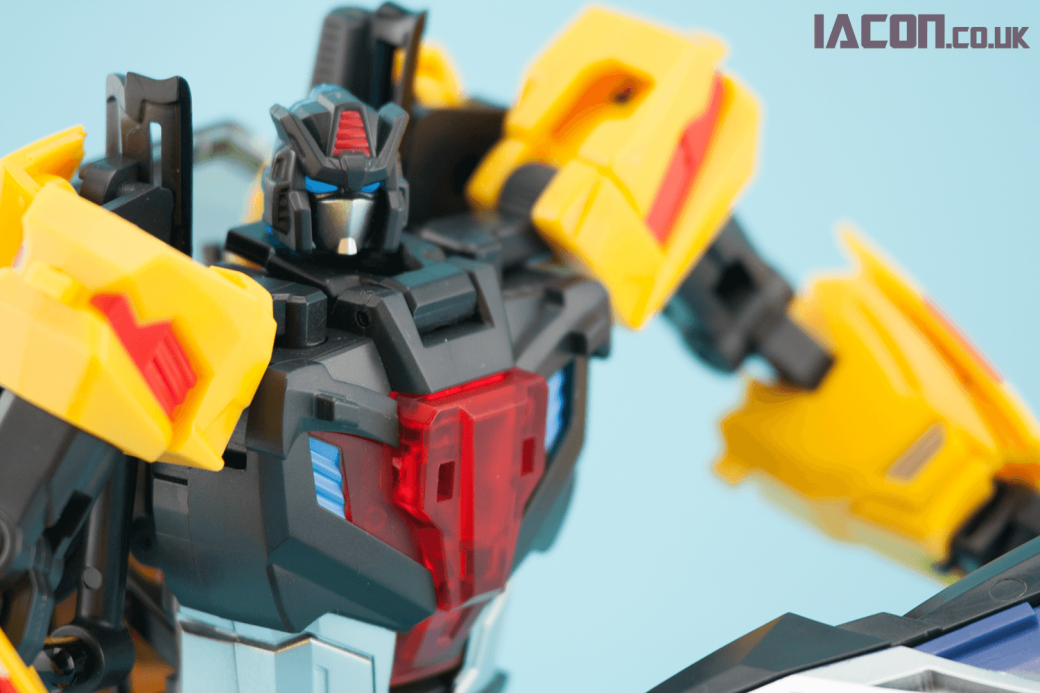 Well this is a lovely little toy make its way to my shelf.  He’s one of those characters you don’t expect to turn up, but with Star Saber and a KFC version of Victory Leo, along with TFCs Liokaiser already being out there I suppose it was only a matter of time more bots arrived to fill what holes remain in the Victory line up.  Not sure if anyone is crazy enough to give us anything as huge as a Galaxy Shuttle mind!

There are a lot of things to like on this guy, the most obvious thing being him looking the part.  His colour scheme and deco are pretty much what you might want from a modern representation of the character.  Admittedly there are a few flourishes that are not strictly animation or toy accurate, but I link to think that this is the kind of detail that would absolutely be in place had the tech and money been in place at the time.  Further to that, plenty of paint has been splashed around and where it has it’s been cleanly applied.  Not only that, but the whole vehicle mode has a gorgeous gloss finish to it.

Throughout the toy the plastic feels fairly sturdy and the thing is racheted for days!  Just about every joint you care to bend has a sweet satisfying click to it, and the spacing between each step is small enough to not cause problems posing.  Add in all the friction joints where they are used being near perfect and you end up with a toy that is fun to pose and pose again.

The default head is home to a Brainmaster toy who is tiny and carries half a face on his back.  Yes, the toy features a working Brainmaster gimmick where the extra figure can be inserted into a compartment hidden behind a fold down panel on the torso that, when returned to a flat chest lifts the brain master in to place.  Even with this hollow head they’ve found space to add light piping to the eyes.  I’m personally not a big fan of light piping and would generally prefer a nicely painted set of peepers, but given it’s there at least it works pretty well.

Sadly it’s not all moon beams and candyfloss and the toy does have a few irritating parts to it that must be mentioned.  While it is great to have a Brainmaster, the figure itself is fairly iffy with very limited articulation, and when in place in the large robot pretty much leaves no head movement.  On the plus side, an additional non-Brainmaster head is included that is very well finished and just pops on and off a ball joint so is very easy to swap in and does give the head articulation you might be missing.

Even though it’s very minor and not a big cause of grief, like the TFC Liokaiser figures came with “add these yourself” screw covers, this toy also comes with finish the toy yourself parts for vehicle mode lights and wing mirrors.  It’s not a deal breaker, but it’s always a little disappointing when you receive a toy that isn’t quite finished off.  And while we’re talking about finishing the build off, we should talk about build quality.  I’ve had two parts fall off so far.  Neither has been a big problem with one being a mostly unneeded heal section that he stands fine without and the other a hand pinging off its mushroom peg when pushing the toy in to the (entirely fixed with no moving fingers at all) hand.  The hand was easy enough to pop back on though the heel piece did need a tiny spot of glue to reattach, but even easy fixes like these should not be needed and are a let-down.

The final troublesome area is the transformation.  It’s not terrible, but it is fiddly and more deliberate than it really needs to be.  For example, when moving the outer parts of the bonnet to the back of the bot for best results you should be sure to rotate the pieces forwards and up at the back rather than just moving them backwards.  And the legs are trouble too!  Levering the feet out of the inner legs is a hassle and much more work than it needs to be with three stiff rotating parts needing to be moved in the correct sequence to get them in to place, while the panels that form the legs are on bars with ball joints at the ends that must be manipulated *just so* to tab in to securely form the leg.

Closing up here, it’s a really nice version of Laster and a fairly fun toy.  There are definitely caveats to giving him a solid recommend, with easily fixable bits falling off when they really shouldn’t and the transformation being a bit of a pain (or very much a pain to start with) that does get much easier after a few times round.  Having been back and forth several times now I would almost go as far as calling it quite playable, but it absolutely takes more than a little effort to get there.  Plus, I am quite excited for a new combiner to be complete alongside Victory Leo and Liokaiser!

Now keep on scrolling for the rest of the gallery…