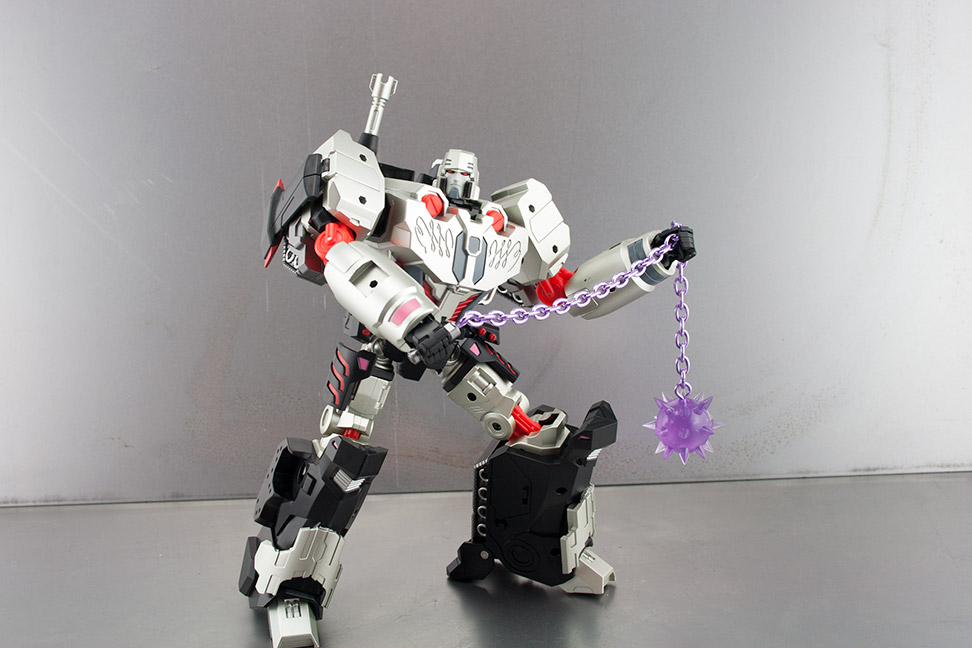 Since this MMC version of megatron turned up I’ve had plenty of time to fiddle and play and pose, and it turns out he’s a proper lovely boy! But not wanting to overstate it, I do think there are a few iffy bits too. For starters, the stupidly giant cannon hinders articulation a fair bit and, as it plugs in rather than slides on like a Maketoys figure, it can pop off reasonably easily. I mean, it won’t pop off by itself and it sits in there very securely, and it’s probably better this way to avoid lasting damage, but still slightly annoying.

In addition to this, the hip and thigh skirts can get to be in a little bit of a conflict as you move and manuipulate the legs in to the pose you want, and they don’t seem to like sitting perfectly together all that much. It’s not a huge problem as things move and can make space, but can result in some unsightly gaps appearing.

My first few pictures of him when I got him I thought were gonna be lookers, but when I got them off the camera and in to Lightroom I decided I wasn’t happy with the space left by the hip skirts position. I think I can work with it, both with the posing of the toy and with positioning and camera angle, but it’s deffo not perfect.

The cannon plug sockets on the arms which I had minor concerns about from early pictures on the other hand, once I got him I barely noticed them. Not a sniff of a worry for me, but I can easily see how you might feel different.

Articulation is solid and I think you can get everything you want from it with things moving out the way as needed, the only major problem is the cannon being far too big as I mentioned before so one arm might not give you it all, but I am reasonably satisfied with what I can do.

If you’re like me and plan to have him sitting on a MTMTE/Lost Light shelf there is a good chance he’s gonna go gun-less anyway, but you if go for extreme toy poses this might be a deal breaker.

His transformation is a continuation of MMC style and is proper good! Like their Whirl he is very simple and straight forwards, without unneeded complexity but he does have a little more going on, which I like. Yeah, his alt mode isn’t *AMAZING!!!* but getting there and back is smooth, easy, and fun. The one downside, and I may have missed something, but his cannon just plugs in on top at the front with nothing to secure it underneath so it’s a bit floppy and I worry the peg might snap if I don’t take care of it. I know I won’t leave the drill/nose cone plugged in for alt mode when he’s not on a shelf or being photographed for fear of casual breakage, but if you are aware and not deliberately manhandling things it’ll be fine.

One of the nicer things for this toy is the array of extra bits, a jet cone cannon, a cannon cannon that can also be a big fat drill, body part replacements to give him a retro miner look. Some people are even thinking that a second copy to enjoy in both forms is an idea! The actual parts swap to go between miner and leader Megs is very easy with things just plugging in. Want to swap? No problem, no tool bench and laying things out needed, just pop things on and off. Lovely! I’m also a fan of the sword and mace too. Maybe not super MTMTE, but nice nods and he holds them well.

Lastly, the head is magnificent! Nailed that boy! Top work on that count MMC! (I think he might work well with FaceApp…)

Over all, I’m really pleased with him, he looks amazing and has loads of play value. He’s not perfect but I can live with what he lacks in pose-ability given everything else he brings to the table.  What a good lad!