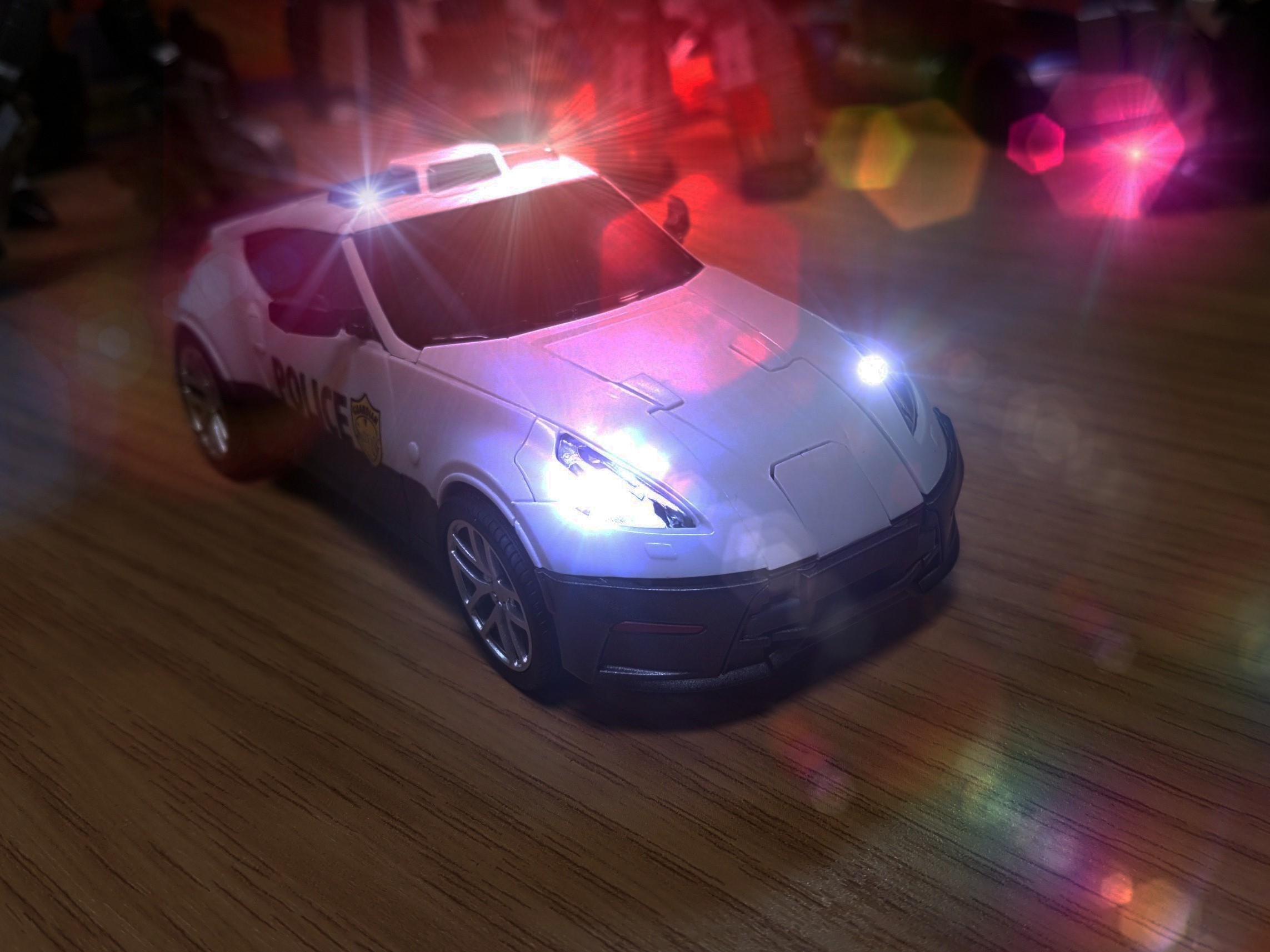 Sometimes you pick up a toy and it fills you with enough thoughts that you are compelled to write some of them down, and today, with Generation Toy’s Sarge (MP scaled Streetwise), it is one of those times.  “But what about him has made you feel this way Dom?” you might rightly ask, and so on to the review.

When he first appeared in his standard-issue-but-beige Generation Toy box it was a very GT/TFM type start and one that I appreciate.  Their foam inner rather than plastic clamshell always gives a premium feel to me, and even though I know it’s not really a big deal and doubly so as I throw my boxes away, it still gives me a sense of it being special. Instructions and a GT info card tumble out as the box is opened and put aside for later and the top layer of foam is removed to an absolute feast for the eyes!  Being a Generation Toy figure he’s based on a more modern version of the Streetwise character, and as soon as I lifted him from the box I was treated to an absolutely stunning Nissan 370Z, probably the best take on what a contemporary version of the original 300ZX should be.  I cannot emphasise enough just how much he blew me away!

After that initial wave of heart-eyed lust had passed and I took a little time to have a proper look, I spotted the alt mode has a tiny potential issue that hasn’t been a problem yet, and I remain cautiously optimistic, and that’s the wing mirrors.  As a part of the transformation they rotate up to make the chest cleaner, and while they are a soft rubber to prevent heavy handed breakage they are just popped in to a couple of small moulded plastic loops.  It may well be fine, but there is the risk there of potential breakage with repeated rotations, however I can’t see any sign of it after the few transformations he’s had so far.

Putting that aside in my mind I settled down to get to robot mode.  Something that struck me upon flipping through the instructions is there are no details on how to get this boy to arm mode, I can only assume the details will appear along with combiner gubbins when the Hot Spot shows up.  I can cope with that.  This results in a pleasantly thin instruction booklet that is still detailed enough to get you from A to B.  That said, it’s still not perfectly detailed, which I kind of like; the steps to follow are shown but it’s only on going back to alt mode I discovered how everything tabs back together nicely, and I’m a fan of that little bit of discovery in a toy.

But that initial transformation revealed another minor concern.  Some of those panels rotate with very little clearance, and certain panels are quite thin (I’m looking at you, car bonnet!) so I became a tiny bit worried that the potential for breakage is there.  It is only a concern though; nothing has broken and with a little care I don’t think it will.  That initial run through did leave me feeling not particularly jazzed by the transformation, and at the end of the experience my initial excitement had taken a down swing.  It wasn’t terrible, but not amazing, and that feeling continued through to the bot mode.

After not having been thrilled by the journey to bot mode I was again disappointed by the initial play time.  Popping him through some poses he behaved fine but I wasn’t feeling him.  The panels on the forearms and calves with the wheels just sort of set there, like the designer had got bored and wandered off without tidying things up as perfectly as they could.  Small but visible gaps can be spotted between these panels and the limbs, and while they aren’t shocking or terrible it just led to my feeling of “meh” continuing to the bot mode.

Looking at the figure before me now I’m not altogether sure where this feeling came from.  The articulation is mostly great apart from forward and back motion on the hips being slightly hampered by static hip flaps, the detail and colour break up are lovely, and he has a *very* handsome face moulded in up there.  When I got to posing him the gaps between limb and panel pretty much hide themselves away and it becomes a thing you absolutely need to look for rather than be obvious.  In fact, the only thing standing out to me now is that I would have loved a couple of licks of red paint on his head, and if that’s the worst thing you can say about a bot… Well, it’s not a bad bot at all!

As I alluded to earlier, it was going back to alt mode that started to bring me around on the toy.  The steps were clear and easy, and I had no trouble getting back without needing to look at the instructions again.  It all just flowed nicely and logically.  Getting all the parts back to where they needed to be was a breeze and it was at this point I saw just how nice the transformation was.  There are tabs and slots and pegs for all the parts to come together and hold together that the initial trip from alt to bot had hidden from me.  Everything has a place to go that only became apparent to me on the journey back.  The small concerns about some tolerances being a tiny bit less than generous, or some parts being a touch too thin evaporated as I realised what a smart and fun toy this was.

And the experience of putting him back to alt mode secured how things were working at the front of my mind for the next trip back to bot mode.  I started to be quite pleased with some of the touches they had added in, such as the forearm panels having a rotation.  A toy with less attention to its transformation could have skipped this and left the user to struggle past it, but this guy here lets you get things out of the way in a move that wasn’t 100% essential but makes life that much easier.

So, with all this in mind and knowing how much I am now enjoying this guy what caused the initial lack of excitement?  There’s my initial lack of understanding in the best parts of the transformation, but it wasn’t that bad.  There’s the small gaps I now only see when I’m looking for them, and a tiny slice of “coulda made that bit red” in regards to his head when in bot mode, aaaand…  That’s about it really.  I don’t have much negative to say at all.

He sizes up really nicely with the recent G Creations IDW Prowl, but is ever so slightly tall for MP Prowl. Now personally, I don’t have a huge issue with this, the idea of all the characters of a class being the exact same height seems a touch odd to me, but I know some people do like the uniformity so it’s there if that bothers you.

I think it was the initial reveal of the alt mode, and just how gorgeous it is.  Nothing could live up to what came out the box when it was opened.  If it had it would be a shoe in for toy of the year!  Sadly, the rest couldn’t measure up to that initial feeling, but that doesn’t mean it’s a bad, or even just boring and meh.  The transformation is fun, easy, and repeatable, and the bot does look lovely and has great poseability.  It’s really quite a good toy and on reflection I’m super glad I picked him up.  If the rest of the GT Protectobots live up to this standard it’s gonna be a wonderful set!